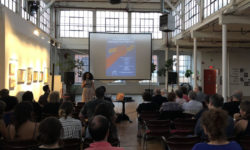 By hamazkayin on May 27, 2018 in hamazkayin-workshop-for-teachers

From the Armenian Weekly WORCESTER, Mass. (A.W.)—This year’s installment of the Worcester Armenian film festival featured the work of primarily young filmmakers from around the United States. The film festival opened at the Sprinkler Factory Art Gallery in Worcester on May 17 with welcoming remarks by filmmaker Talin Avakian, who spoke on behalf of the organizing […]